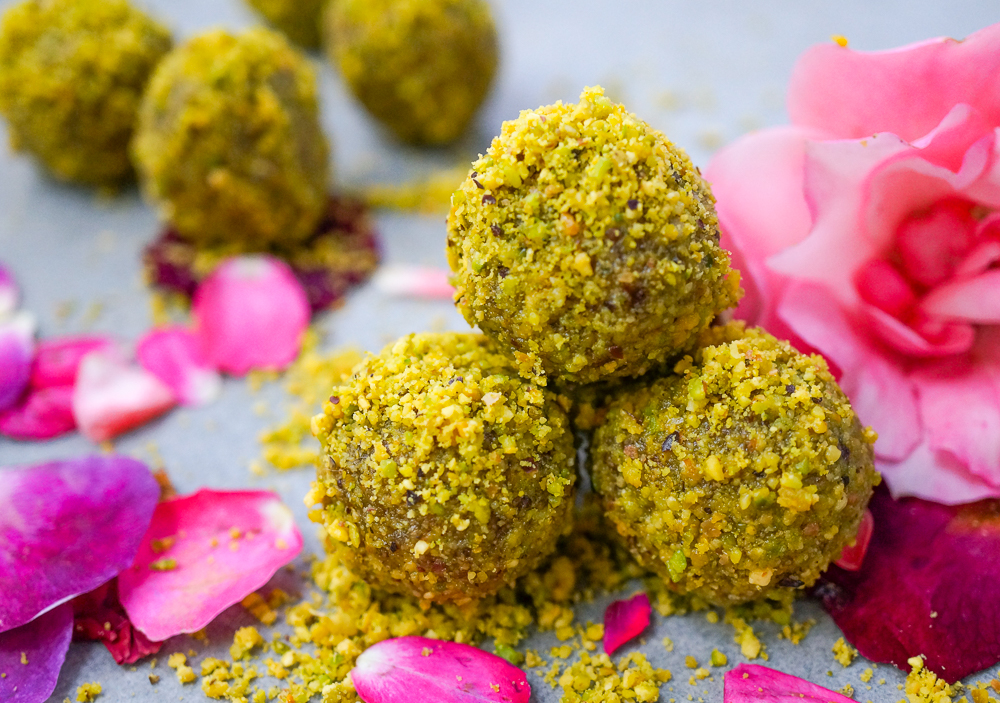 While I’ve now been out of school long enough to recognize that never again will I have quite the same magical combination of carelessness and intellectual stimulation, the September smell of school is definitely in the air (what is the smell of school these days?  Back in my day – ahem – it was the chemically plastic scent of binders, the woody cardboard of Lisa Frank folders, that metallic lead odor from sharpening a pencil.  Are school supplies still a thing?  Does everyone just have their textbooks on iPads?).

These Cardamom Pistachio Rose Energy balls are an amazing pick-me-up throughout the day, whether you’re stuck in sixth period or at a meeting with your ever-droning boss.  They also function wonderfully as a sweets-craving-killer, for those after dinner hours when you’re puttering around the kitchen, hoping that the chocolate fairy has magically granted your cabinets a visit.  The flavor draws on some of the favorite sweets I had on trips to Turkey and Syria, where pistachio baklava and rose Turkish delights are often found in pastry shops and markets, often accompanied by a small swarm of bees who can’t believe their luck.  It’s exotic, sweet and satisfying flavor comes from just a few simple ingredients: pistachios, cardamom and rose water.

Just a hand full of pistachios a day provides enough recommended levels of antioxidants, minerals, vitamins, and protein.  They’re one of nature’s best sources of minerals like copper, manganese, potassium, calcium, iron, magnesium, zinc, and selenium.  A serving contains 150% of your RDA for Vitamin E, known for it’s ability to heal your skin and make it glow.  They’re also rich in mono-unsaturated fatty acids like oleic acid, which are known to lower bad (LDL) cholesterol and increase good (HDL) cholesterol levels within the blood.

Commonly found in both sweet and savory Middle Eastern and Indian dishes, cardamom has a versatile spicy-sweet flavor that makes almost everything it touches taste better. While it’s packed with vitamins and minerals, particularly iron, potassium and manganese (one teaspoon contains 150% of your daily manganese requirement), many of it’s health benefits are due to it’s essential volatile oils, which work in the body in a more potent, medicinal way.  Recent studies have shown that consumption of cardamom reduces incidents of colorectal cancer, and helps to treat it as well.  It also controls hypertension, lowers cholesterol, aids in digestion (and is particularly useful in digestive disorders), and acts as a mild depressant.  The particular type of anti-bacterial found in cardamom combats the bacteria that often lead to food poisoning.

While it’s found commonly in Middle Eastern and Indian dishes, rose water is more of a rarity here – and it shouldn’t be.  Besides having a lovely delicate floral flavor that complements the almost meat-y heartiness of the pistachios, rose water is rich in flavonoids, antioxidants, tannins and essential vitamins like A, C, D, E and B3.  It’s also a mild relaxant and mood-balancer – even just the aroma is known the calm a restless or stressed mind.  It’s made by steam-distilling fresh rose petals and can be found in the international section of most grocery stores, Indian or Middle Eastern markets, and many liquor stores (it’s often used as a mixer in cocktails).

These also have a low glycemic index, and all of the fiber and protein means that you’ll get slow, sustained energy release, with no giddy high that leads to a horrible crash later in the afternoon.  They’re also incredibly easy to make, coming together in less than five minutes.