I have a friend who went to six holiday parties this past weekend.  Six.  I don’t know how a person even pretends to drink that much wine – I myself spent the weekend with hiking in Big Sur, trying to soak in the last bit of California coastline, sunshine and redwoods before Zack and I move to New York in January.  Yup – we’re officially moving back.  We just signed the lease on a cute little apartment in Brooklyn and, come the 1st, we’ll be packing all of our belongings again into the six suitcases we’ve ensured they all fit into, we’ll be tricking our cat into stepping into the travel carrier that’s flown her thousands of miles around the world with us.  Yes, we’re doing all of this during the middle of a time of year when California is a brilliant ball of outdoor sports and sunshine, and New York is a frigid tundra.  Yes, we’re doing all of this during the year that we’re planning a West Coast wedding.  Yes, we’re a little bit crazy – but we’re also super excited.  New York is one of my favorite cities in the world, and though I’ve lived there before, I’ve never lived in Brooklyn (which I’m even more endeared to after seeing the film of the same name.  Have you seen it?  I thought it was one of the loveliest cinematic experiences I’ve had in awhile). 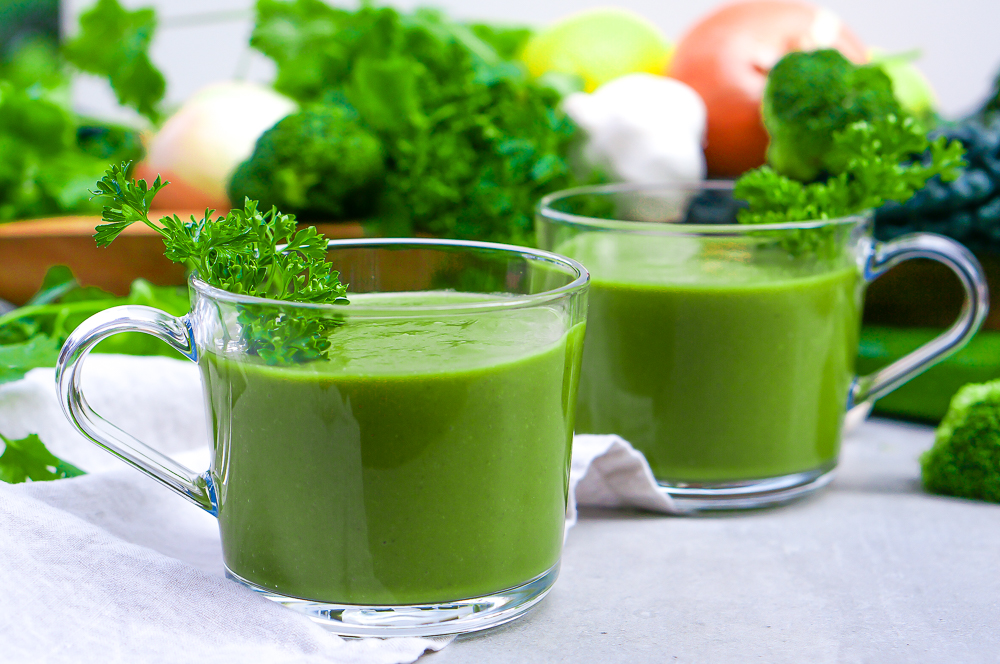 But I digress.  For those of you who spent the weekend indulging – whether it was in alcohol or cookies and cakes – this is the soup for you. I like to make this a few times a month throughout the winter to bolster my immune system against colds and flus, and to protect myself from the inevitable few pounds that tend to creep up this time of year.  Because, basically, this soup is a one-bowl wunderkind.  You know that green juice that Gwyneth is always toting around, touting the miracle benefits of?  This is like that, but way better. 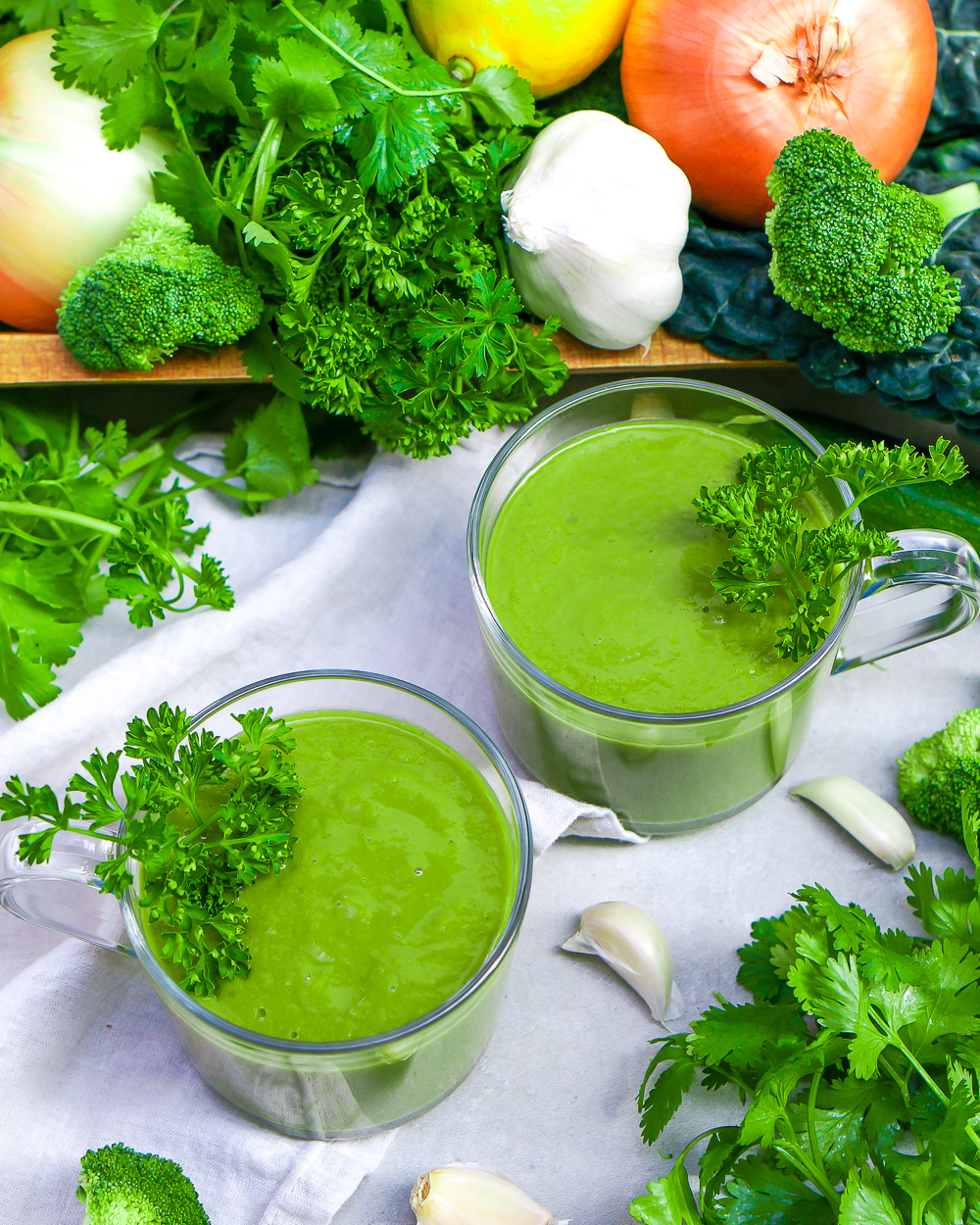 This detox soup has some of the most powerful members of the cruciferous family, kale and broccoli, which increase the amount of glucosinate in your system.  You know what glucosinate does?  It helps rev up your liver, the organ responsible for processing all those champagne toasts and mulled wines you’re tossing back throughout December.  It has cilantro and parsley, both left in their raw form, for an abundance of chlorophyll and digestion-aiding enzymes, in addition to chelating (or blood cleansing) powers.   Garlic, left mostly raw, is one of the most powerful immune boosters on the planet, with antibacterial and antiviral properties (translation: that cold going around the office doesn’t stand a chance).  Lemons also assist in liver function, and help, along with the copious amount of fiber in the soup, to de bloat and get your digestive tract moving. 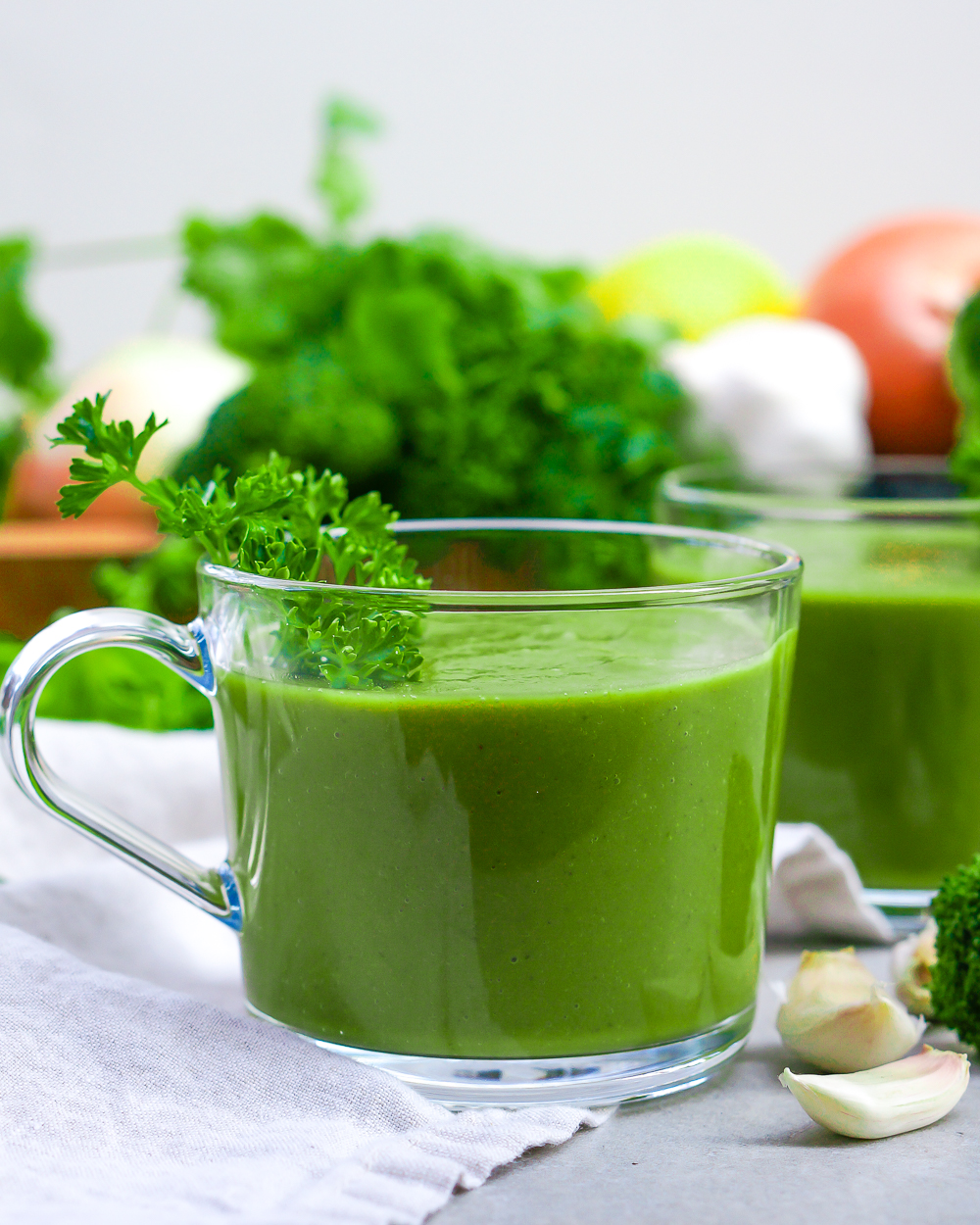 And beyond that: it’s good – far better than the green juices we’re always glugging.  The carmelized onions add a bit of savory sweetness, and the overall taste, while definitively fresh, is that of a really good vegetable soup.  I serve this all the time at dinner parties to people who are not at all health interested, and they gobble it up.  But personally?  I like to make a big batch on Sunday night and sip it throughout the week, just to give my system a boost of health. I’ll take it in a Mason jar to snack on when I’m out and about, and sometimes, I’ll even sip it for breakfast – there’s something so nice about knowing you’ve gotten a week’s worth of nutrients in by 9 am.  Bookmark this one – it’s one of my absolute favorites to keep coming back to whenever I need a little health boost.