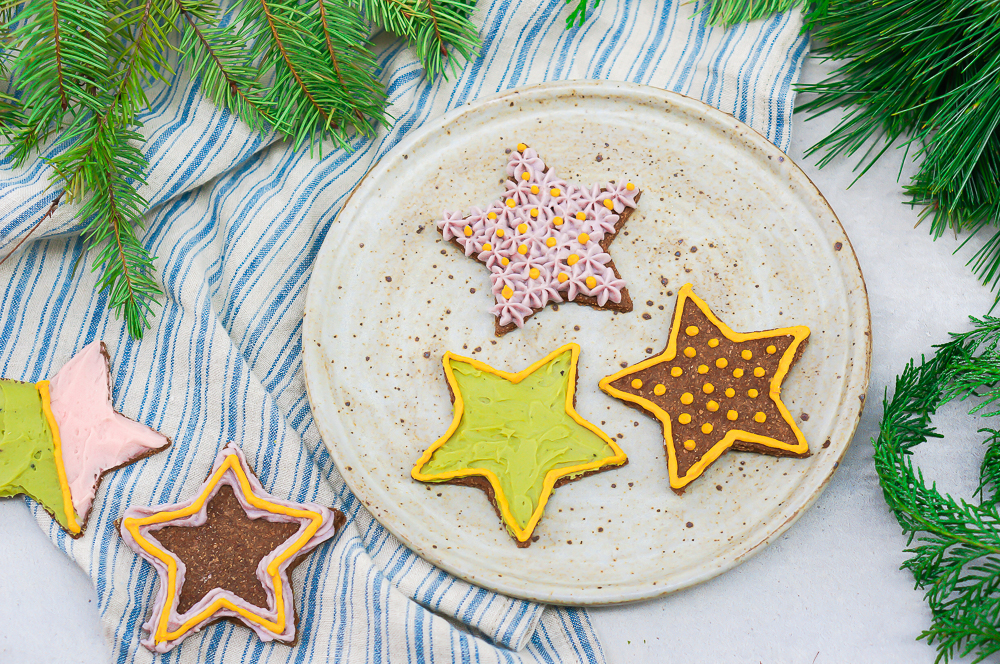 While we often had a lot of chaos and dysfunction in my family’s house around Christmas time, there was one tradition that somehow stood above the fighting and craziness: decorating gingerbread men. Sometime during the week before the 25th, my sisters and I would gather around the kitchen table and my stepmom would pull from the high, rarely accessed shelf of the cabinet a box filled with cookie cutters shaped like snowmen and candy canes and jaunty men and skirt-wearing women (while it might have anti-feminist connotations, I always loved that skirt – so much space for decorative creativity!).  We’d cut out our characters, our arm muscles aching after rolling and rerolling the dough, then wait eagerly as they cooked and cooled.  That feeling – eagerly waiting, the scents of cinnamon and nutmeg and ginger that filled the kitchen taunting me – is still palpable even now, years later.  It feels like the feeling that most defines Christmas of childhood – eagerly waiting for something that seems too good, and too magical, and forever away.

Eventually, we’d break out the frostings and the sprinkles and the kitchen table would take on the look of a war zone in Candy Land, as each sister tried to best the other with creativity or technical skills or sheer quantity of frosting used. 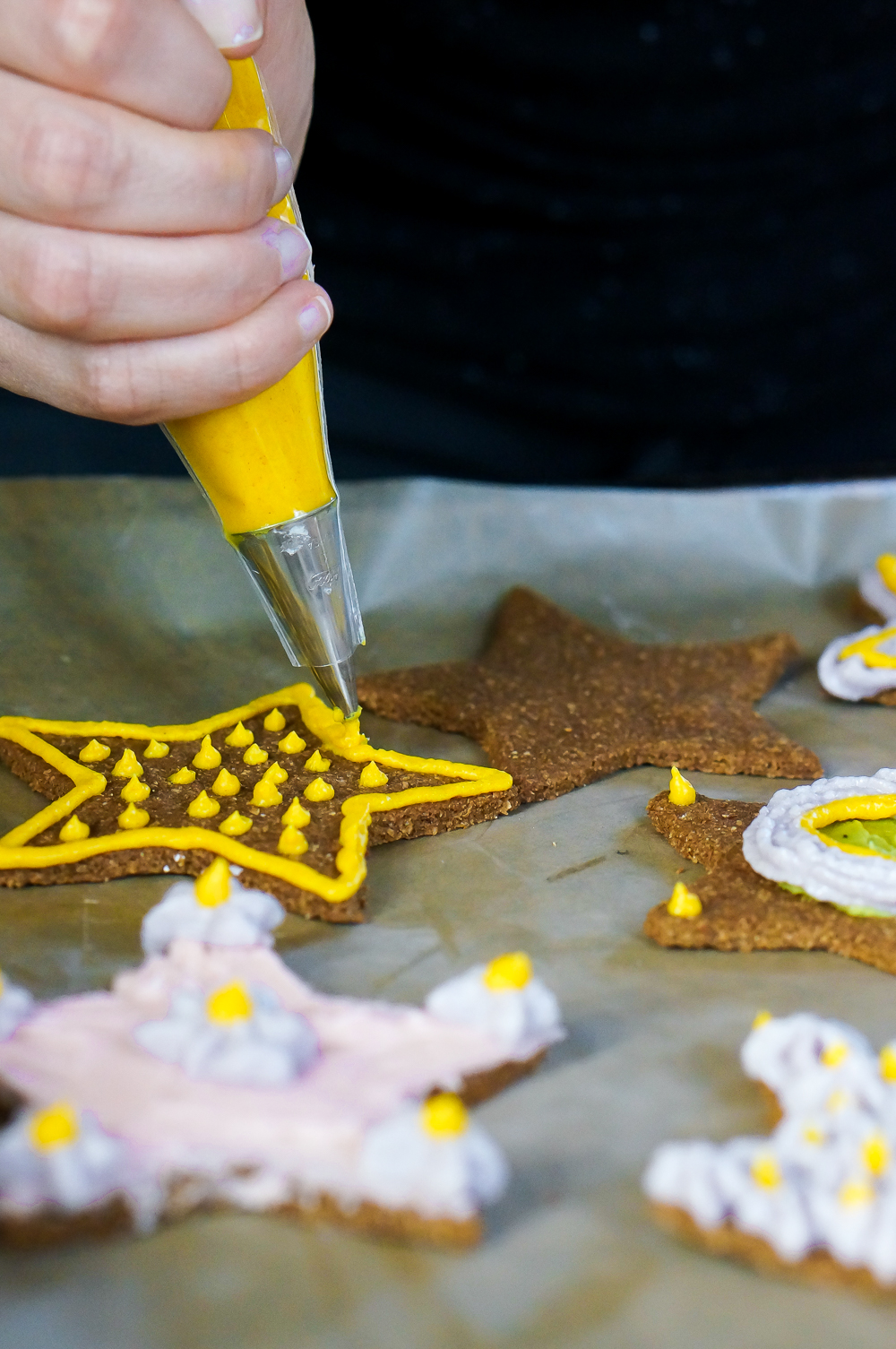 After I began doing Christmas with my fiance’s young nieces as an adult, I became determined to bring the tradition back.  There was only one problem: in the years since my Skittle and Taco Bell-filled youth, I’d become more conscious of what I put in my body (see: this whole blog).  I pride myself on not being too strict about things – I like taking care of my body to feel like a lovely thing to do, not a chore, and also, life’s short! It should be fun!  I eat donuts, I drink cocktails, I share fries with friends when I’m out at a bar (or Tater Tots.  God, do I love Tater Tots).  Artificial color and flavor, though, is the one place I draw the line. They simply don’t feel good to have anymore, and there have been too many studies showing their negative health effects.  In fact, when we lived in London, Zack and I were shocked to find that Europe not only doesn’t use most of the artificial colors or flavors that we do here, but many are actually banned. 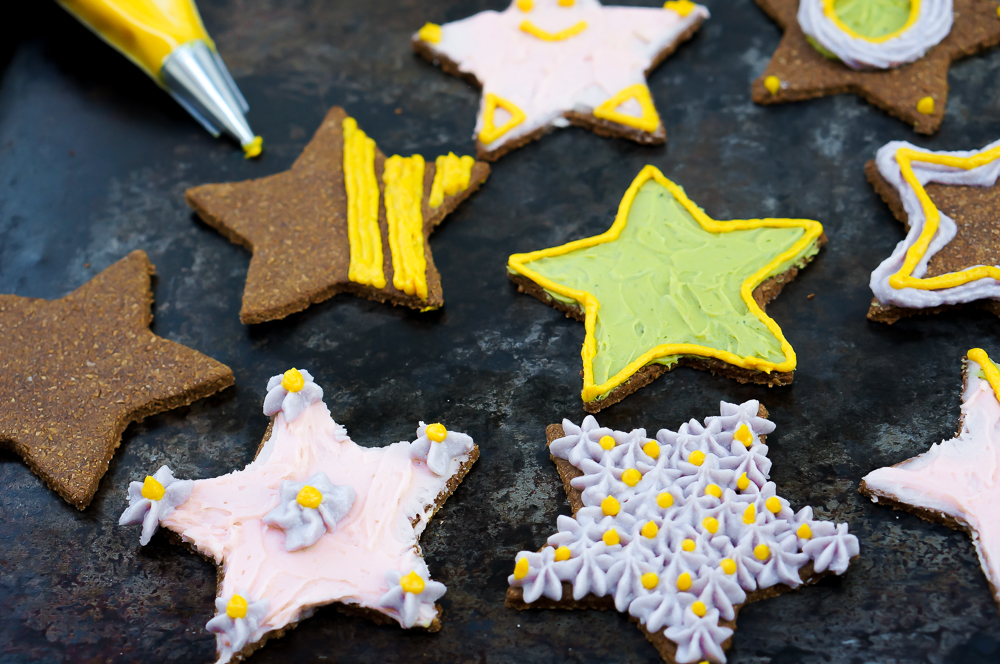 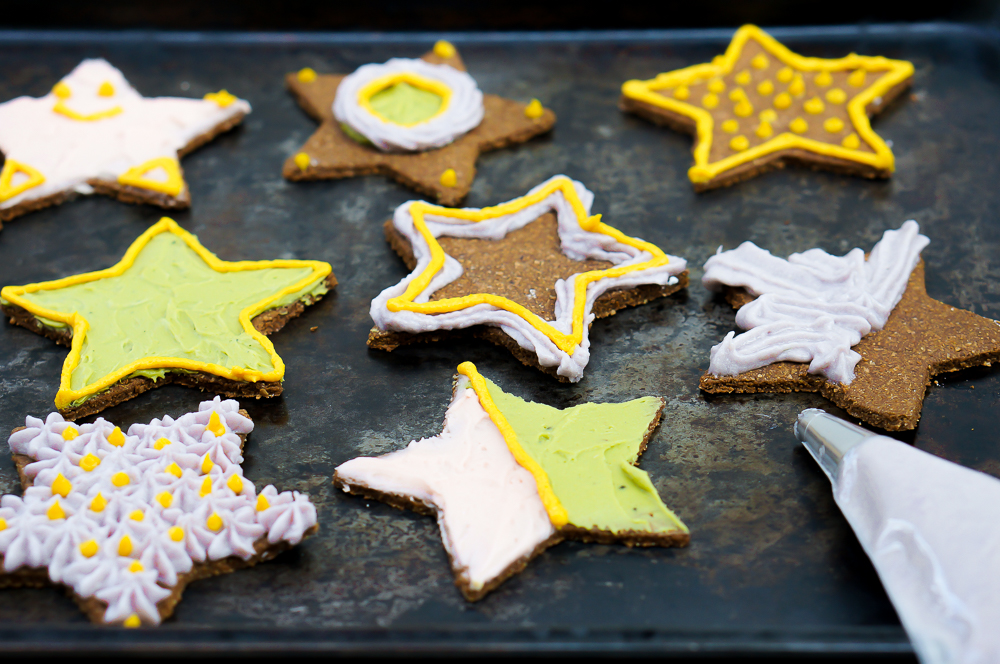 And the frosting that I used to decorate with?  It’s loaded with artificial color.  There’s one brand that makes organic food coloring, but I found their products to be incredibly annoying to use (I never could quite get the colors I desired), hard to find, and expensive.  While there are plenty of amazing healthy gingerbread men recipes online, there’s very little that I’ve seen about easily coloring homemade frosting – so one intrepid evening, I decided to go for it.  If you read the ingredients on the back of many candy packages in England, you’ll see things like: “yellow colour (from turmeric)” or “red colour (from beets)” (doesn’t that “ou” just bring out the British accent in your head??).  Taking a cue from them, I decided to look to nature.  I used turmeric for my yellow, beets for my red, blackberries for my purple, and matcha tea for my green.  I went to late one night, unsure how my experiment would turn out. 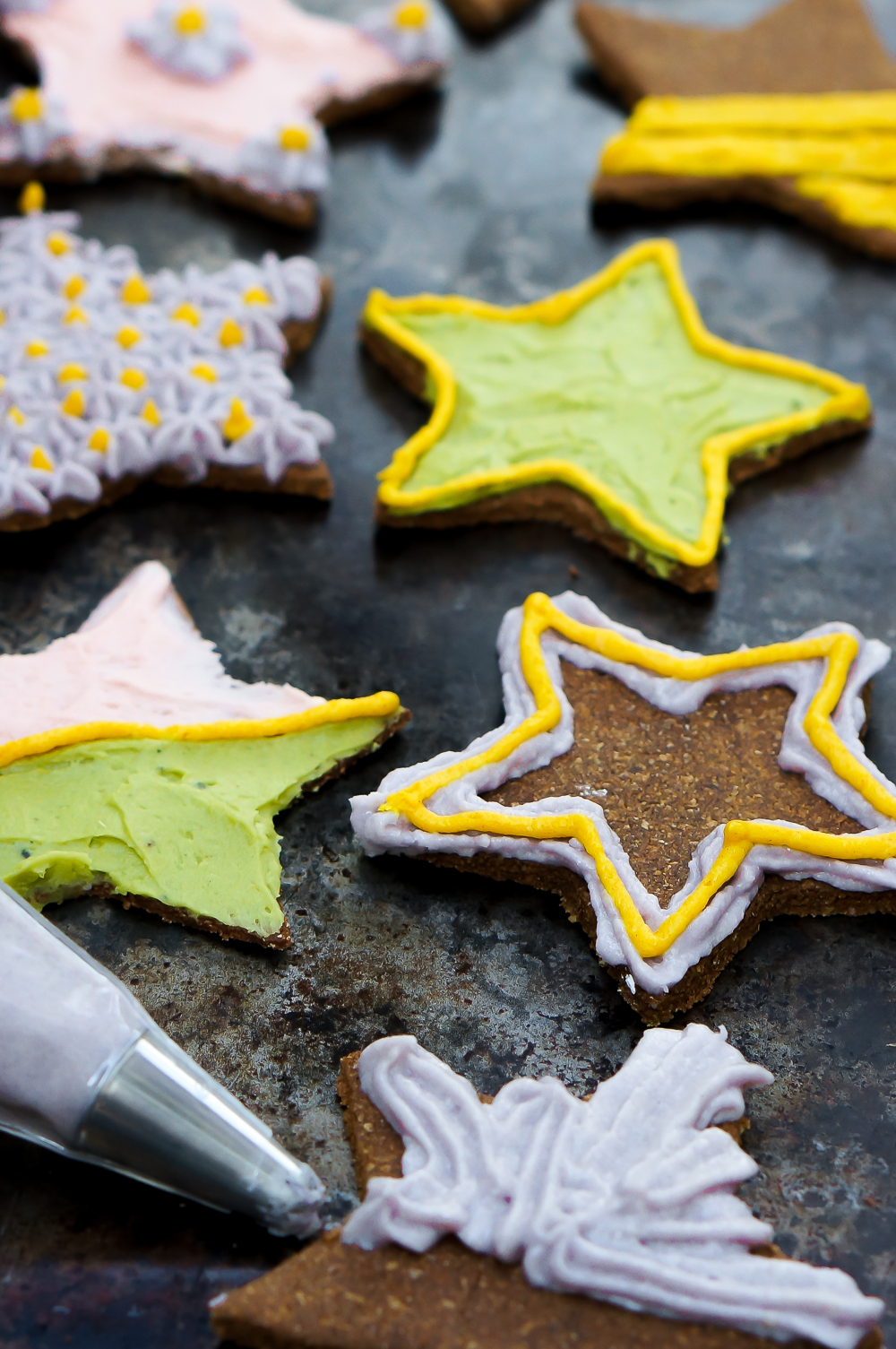 But it turned out amazing. The natural dyes are super easy to make, and while they don’t produce the day-glo colors of childhood, each was distinctively the color I was hoping for, and the shades were a lovely, pretty pastel.  I tried them in both my cashew frosting and a more traditional buttercream, and they worked fantastically.  Don’t worry about fading either – these colors stay vivid even after a few days.  But, Liz, you ask – frosting with beets in it?  Doesn’t that taste weird? Here’s the truth: the beets and blackberry (or red and purple) don’t taste different at all, because you’re essentially extracting the dye from the fruit during the boiling process, and using so little of the resulting liquid that the frosting tastes exactly, 100% the same.  For the turmeric and matcha, you’re stirring the powder directly into the frosting, which results in a mild flavor.  The matcha one tastes kind of like green tea ice cream – which both me and all of my testers thought worked really well with the gingerbread flavor – and the turmeric has a light, herby note that I also thought worked well with the gingerbread.  The one other thing is the caffeine content of the matcha – I used 1 tsp, which has roughly 70 mg of caffeine, depending on the quality of matcha you use.  This is the same amount of caffeine as a 3.5 oz bar of semi-sweet chocolate, and half the caffeine of a bar of dark (70% or higher) chocolate.  Matcha also is green tea in whole leaf form, and absorbs into your body in a gentler, slower way than most other forms of tea or coffee – the resulting feeling is less “buzzy” than generally alert and energetic.  That said, if you’re avoiding caffeine altogether, you might want to skip the green coloring. 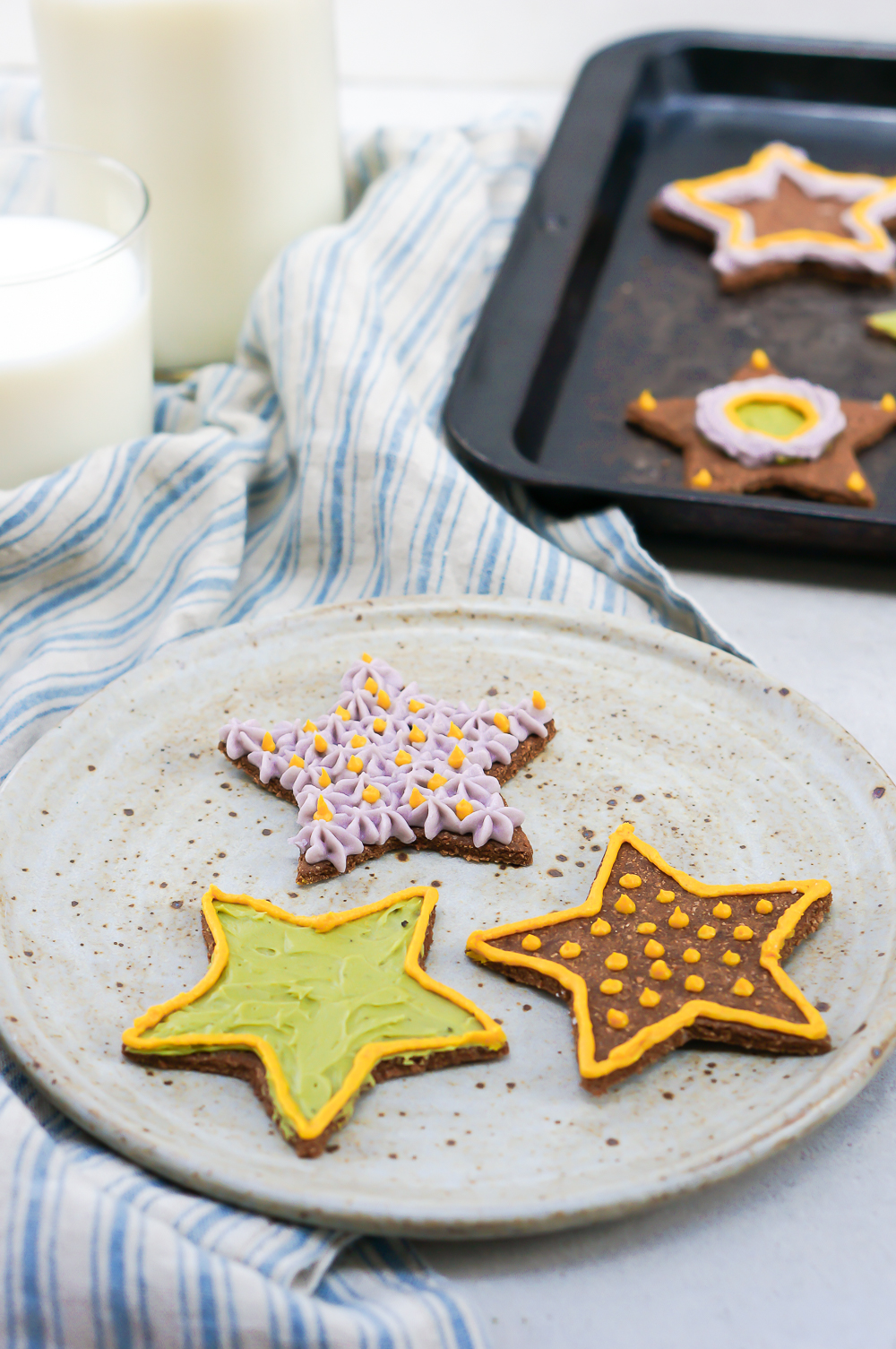 These dyes are super flexible.  I’ve included both my favorite buttercream and cashew frostings.  The gingerbread cookie recipe I used – my absolute favorite – is from Sarah at My New Roots.  It’s vegan, sugar free and amazing, but it does use spelt flour as its base, so it wouldn’t be a good choice for those avoiding gluten.  I’ve also tried these paleo, vegan ones and had great success.