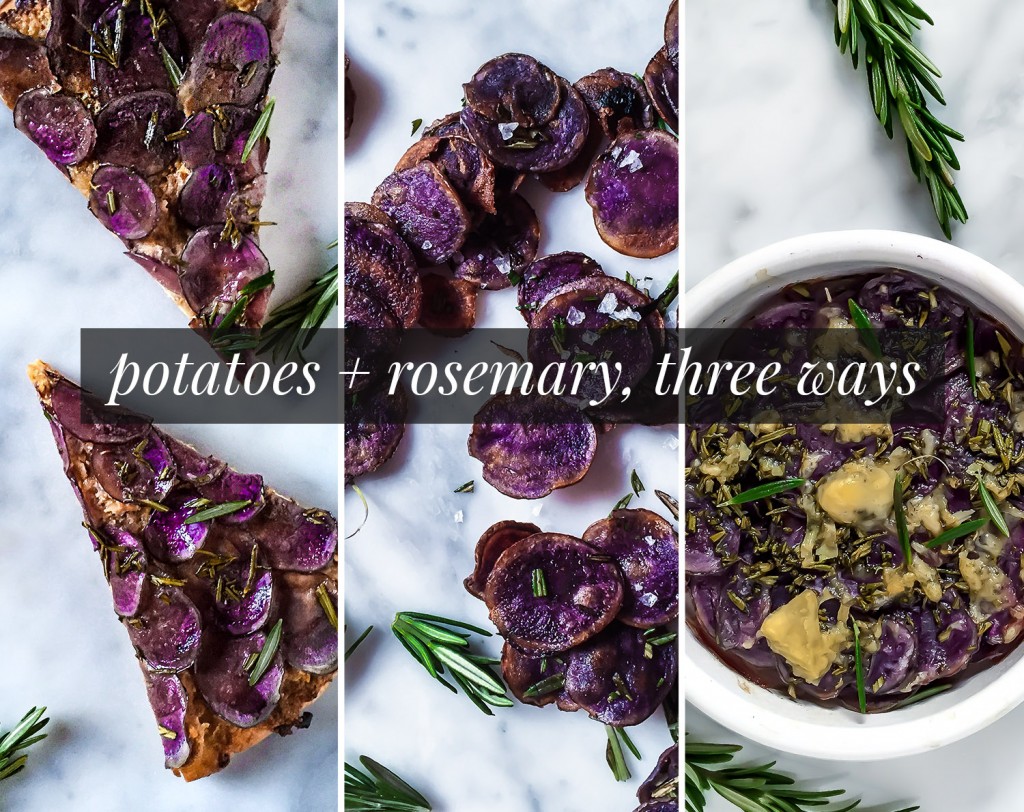 When I saw these gorgeous purple potatoes at the Farmer’s Market, I knew I had to have them.  Not only are they delicious – they taste like most new potatoes, with a touch more earthiness – but they’re bursting with health benefits:  that brilliant purple color is due to an antioxidant called anthocyanin.  This antioxidant is a large part of the reason that blackberries, blueberries, purple cabbage, purple kale (do you sense a pattern?) are good for you, and has been shown to boost immunity, lower blood pressure and even help prevent cancers.  I also picked up some rosemary, because rosemary and potatoes are friends of the sandwich-splitting, three-am car ride variety.  Rosemary, like all herbs, is a health superstar:  beyond general immune boosting, it’s known for its circulatory and respiratory benefits, making it wonderful for people with asthma, allergies or diabetes (if I have a cold or allergies, I’ll often make rosemary tea and inhale the steam through my nose and deep into my lungs).

I came home intending to top a caramelized onion-walnut pizza, and that’s exactly what I did.  The recipe is adapted from pizza I had at Jim Lahey’s Co. in New York City, one of my favorite pizza spots in Manhattan, and it’s a show-stopper:  the onions caramelize for an hour until they’ve developed a deep and fragrant sweetness, before being blended with walnuts and sea salt.  The three ingredients somehow come together to be far greater than the sum of their parts, creating a pizza sauce that’s savory and sweet, earthy and rich, and completely delicious.  I spread it in a thick layer on a store-bought rye sourdough (low in gluten, and fermented for maximum digestibility) pizza dough, then topped it with the purple potatoes, sliced thin on a mandolin, rosemary and, after baking for about 40 minutes at 375 degrees, a drizzle of olive oil.  The pizza was divine – as equally wonderful as a vegan appetizer option at a cocktail party as it is for a family dinner. 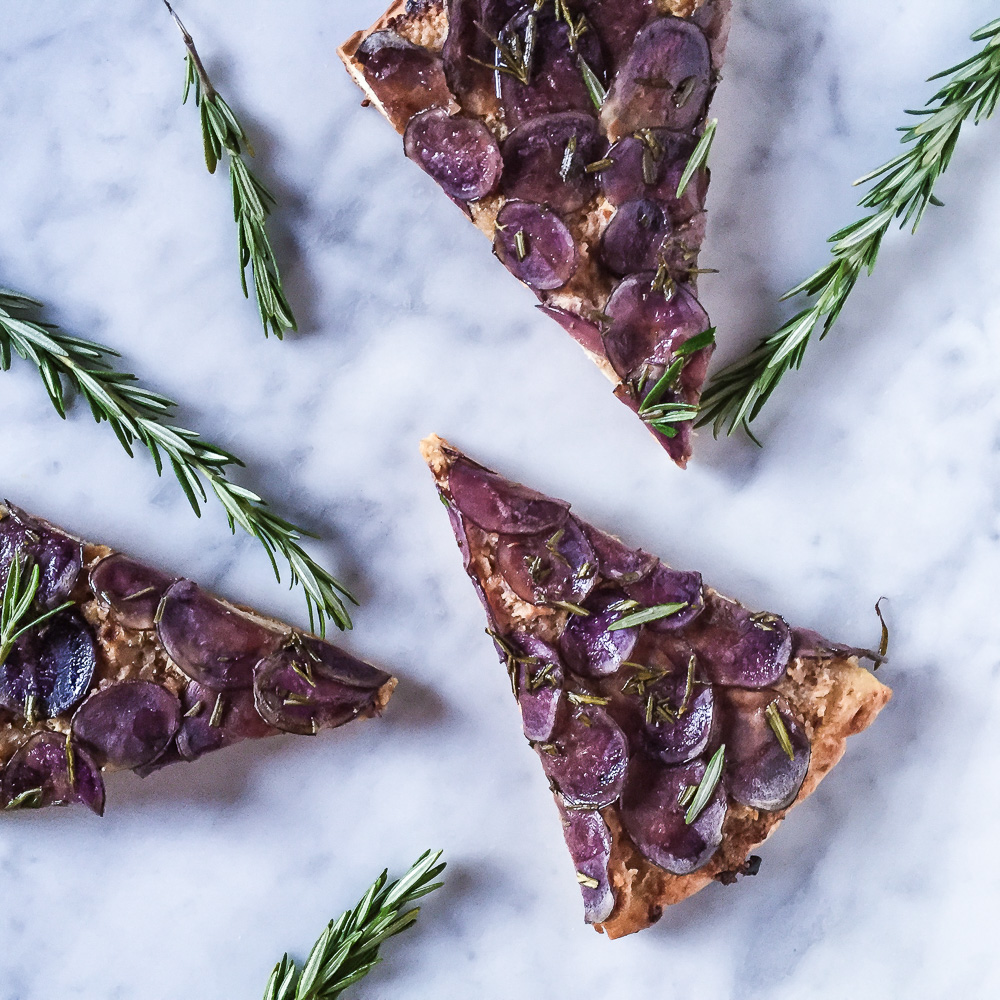 2 tsp of ghee or high heat oil of choice

Caramelize onions with ghee at low-medium heat for an hour, stirring every 15 minutes.  Pulse in a food processor with water and walnuts until mostly smooth, with a few chunks for texture.

But – I still had potatoes left.  I still had rosemary left.  I was loathe to shove them into the abyss of my kitchen cabinets, so I decided to keep going.  A gratin, I decided, eyeing my already-mandolined potatoes lying flat on the cutting board!  I layered them in a small baking dish with chopped garlic, parmesan, rosemary, sea salt, and a few pieces of grass-fed butter, drizzling a bit of olive oil and a splash of cashew milk before baking it at 400 degrees until the parmesan on top was golden brown and bubbly.  The resulting gratin was fabulous – gluten free, low in lactose (grass-fed butter and cheese have much lower levels than milk, and are, as a result, much easier to digest), vegetarian and bursting with antioxidants.  These could also be made ahead of time and popped into the oven, making them an excellent dinner party dish. 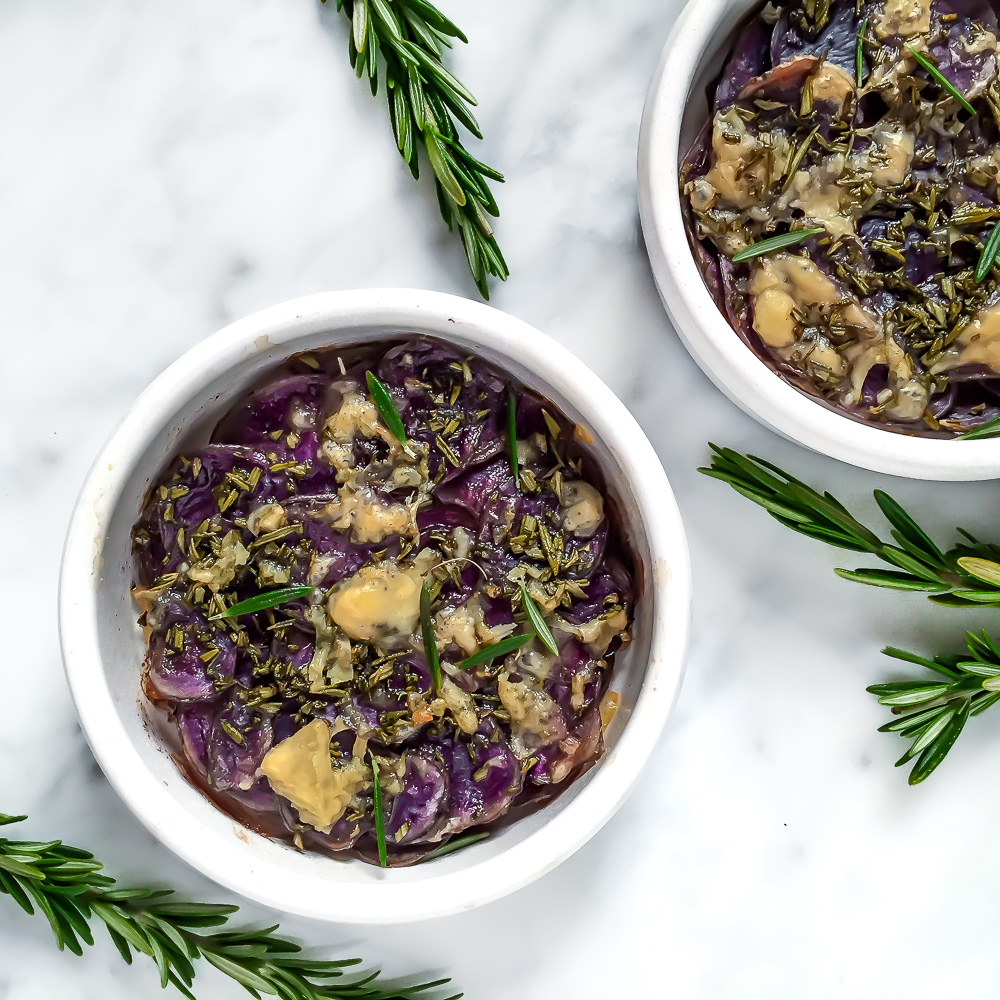 But!  I still had more purple potatoes and rosemary left!  I sighed, rolled up my sleeves, and consulted my boyfriend.

“Whatever,” he said.  “Anything’s better fried.” 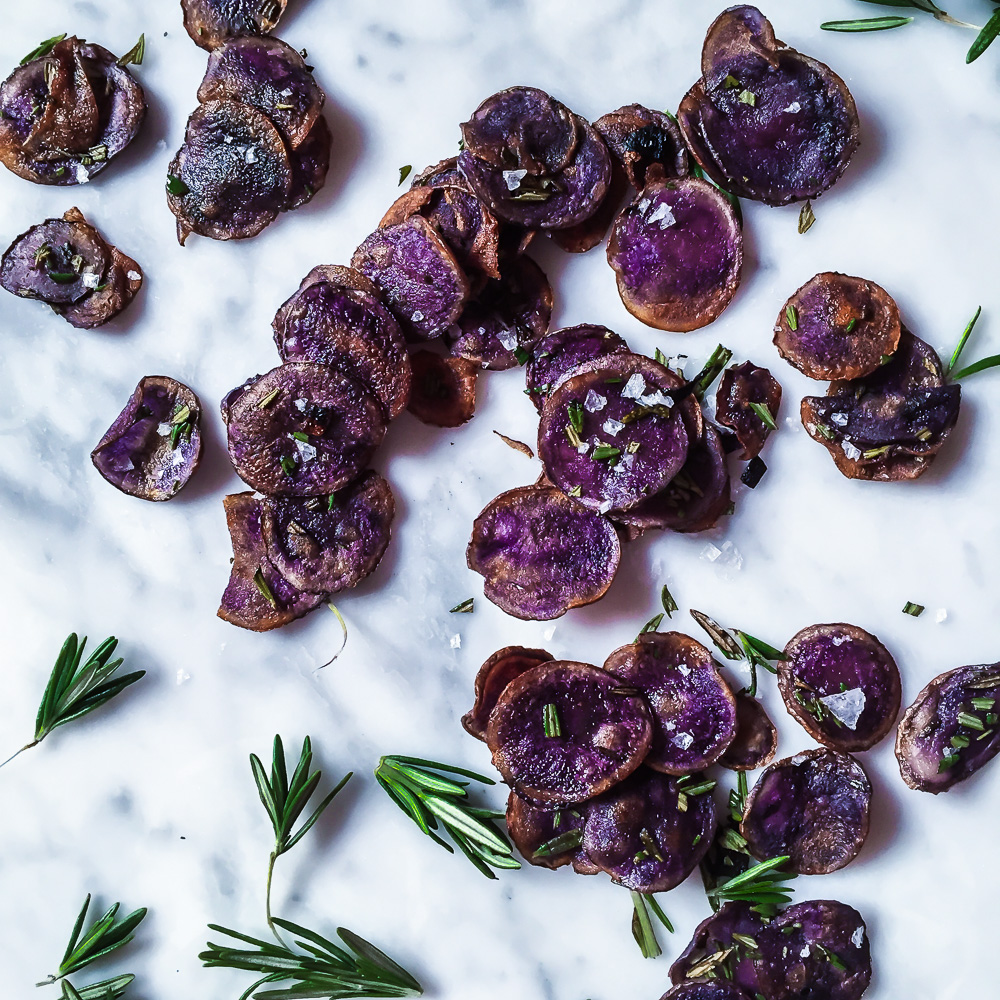 I heated up a few tablespoons of coconut oil (enough to cover the bottom of the pan and be about a half an inch deep) in a sauce pan, waited until it sizzled when I put a slice in, and tossed in all of the leftover potato slices.  I cooked them on medium-high heat until they turned golden brown, then used a slotted spoon to transfer them to a metal bowl, where I tossed them with the residual rosemary and a generous pinch of sea salt and pepper.  I wasn’t even sure frying this way would work – I’ve always been shy about the possibility of burning my face off/my kitchen down with deep frying, and as such, don’t have a ton of experience with the practice.  But this method – which I’d call a happy medium between deep frying and pan frying – worked brilliantly – the resulting chips were perfectly crisp, lightly sweet from the coconut oil and so so delicious.  Keep them in a tightly sealed container at room temperature for 3 – 4 days – or do as I did, and eat them all in one sitting, then sit satisfied that there are – finally – no potatoes left.

// all recipes can be made with any kind of small, skin-on potato